From a local newspaper:

The other day I set off for work, leaving my husband in the house watching the TV as usual. I hadnâ€™t gone a hundred yards down the road when my engine conked out and the car juddered to a halt. I walked back home get my husbands help. When I got home I found him in the bedroom. I couldnâ€™t believe my eyes. He was parading in front of the wardrobe mirror dressed in my underwear and high heel shoes, and he was wearing my make up.

I am 32, my husband is 34, and we have been married for 12 years. When I confronted him, he tried to make out that he had dressed up in my lingerie because he couldnâ€™t find any of his own underwear. But when I asked him about the makeup, he broke down and admitted that he has been wearing my clothes for six months. I told him it had to stop, I would leave him.

He was made redundant from his job six month ago, and he says he has been feeling increasingly depressed and worthless. I love him very much, but ever since I gave him the ultimatum, he has become increasingly distant, and I donâ€™t feel I can get through to him any more. Please can you help?

A car stalling after being driven a short distance can be caused by a variety of faults in the engine. Start by checking that there is no debris in the fuel line. If it is clear, check the jubilee clips holding the vacuum pipes onto the inlet manifold. If none of these approaches solves the problem, it could be that the fuel pump itself is faulty, causing low delivery pressure to the carburettor float chamber. 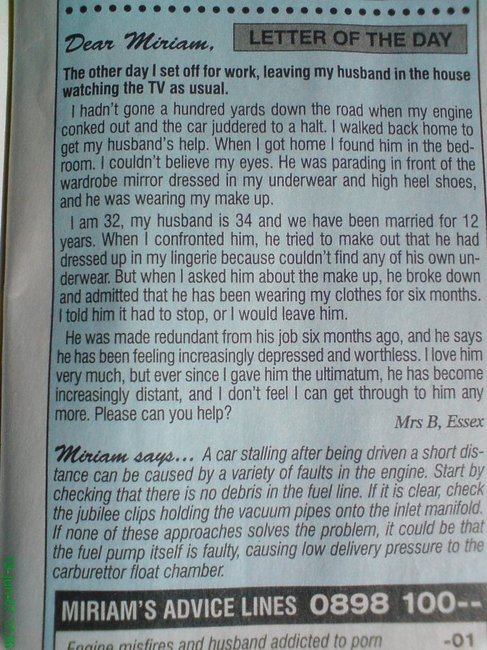